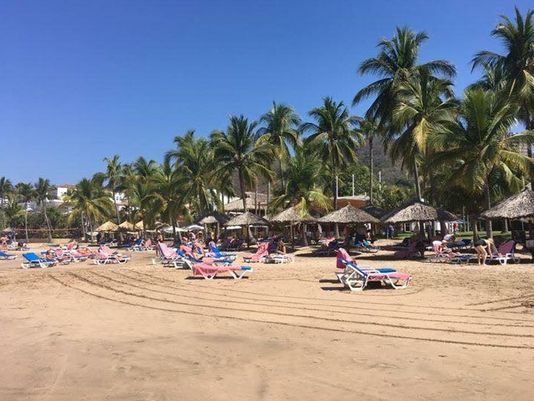 IXTAPA, MEXICO—Each morning at the Club Med Ixtapa Pacific, the swimming pool fills up with guests for water aerobics. In the afternoon, people gather at the beach for volleyball.

During a recent week in February, the more than 500 guests get to enjoy all of Club Med’s regular activities. But there are a few notable additions: Alcoholics Anonymous and Al-Anon meetings, meditation sessions, and pop-up gatherings on the beach to share stories of sobriety.

This trip is organized by Sober Vacations International (SVI), a Los Angeles-based group that is celebrating Its 30th anniversary. The company plans five to seven trips a year, such as Alaska and European cruises, African safaris, Grand Canyon river rafting adventures, and skiing in Park City—all alcohol-free.

“We get the support to do things that frightened us without alcohol,” says Steve Abrams, who started the company and has been sober for 36 years.

A number of other companies have also started offering alcohol-free trips in recent years. For instance, Clean Getaway Travel, based in Key West, offers group trips but will also plan honeymoons for sober people or even a vacation for one. Upcoming adventures include a week-long trip to Sicily. Sober Celebrations is organizing trips to the British Isles and South Africa, as well as a cruise on the River Rhine.

Typically, the sober groups are not the only people aboard a cruise ship, but the travelers help each other stay away from alcohol with support meetings and camaraderie.

In its 30 years, SVI has organized more than 100 trips. Nearly 84% of its clients are return guests. In all, up to 40,000 people have taken trips with SVI over three decades.

“We have a deep-seated connection with each other that’s not like anything else,” says Gary Stromberg, SVI’s public relations representative. “That connects us in a deep meaningful way.”

Most of the trip’s participants are in Alcoholics Anonymous. Others are in Al-Anon, which is a support group for family members of people who have drinking problems. A few are just people who want to have alcohol-free vacations.

The first trip Abrams organized was also at the Club Med Ixtapa, a sprawling 1940s Mexican hacienda-style family resort located between the Sierra Madre and Pacific Ocean. About 200 people signed up. Now, SVI is able to buy out the entire resort, with all-inclusive packages on this particular trip starting at $995 plus airfare for friends sharing a suite. During the trip, the resort is referred to as a “Sober Village.”

“It was just playful and fun and safe,” Abrams says of the first trip. “People loved it and it just grew. They were very open-minded people.”

During the week, Club Med, a worldwide chain with some resorts known for boozy all-inclusive packages, stores away its alcohol. The bars serve soft drinks, coffee and mocktails such as the Iguana made with lemonade and mint syrup, and the Chihuahua, a mixture of mango juice and Sprite.

Ever had a broken heart? Send the relics to this L.A. museum

To encourage interaction, guests wear name tags with their first name, last initial and hometown. That’s in line with AA’s standard practice for how members identify themselves, though the vacations are not sponsored by AA. At lunch and dinner, guests are asked to sit with people they don’t know. There are many families on the trip, but there are also single travelers who are quickly embraced by others.

When I ask Michelle Z. of Palm Beach for directions, she immediately feels comfortable enough to tell me her story while we lounge by the pool. She’s been sober for nine years and now counsels those who have addictions.

“It’s fabulous to be free for me, finally at 53,” she says. “I wouldn’t have my old life back. I want this new life. It’s taught me to become the best mom, the best daughter, and a good friend.”

Michelle says it can be difficult for sober people to feel at ease traveling, especially when so many resorts and hotels encourage drinking. With SVI, she says, “I feel immediately welcome, comfortable, well-received.”

This is her second trip with SVI. Peppy and pretty, she flits around in colorful beach cover-ups chatting with old and new friends.

“For a lot of people, it’s almost like a reunion,” says Max Abrams, Steve’s 34-year-old son who helps run the company. “It’s a giant extended family.”

During support meetings, speakers give pep talks and tell their life stories. Every morning, leader Al S. guides the audience in a meditation. On a large notepad in the Sober Village, people write information about pop-up meetings. On one day, there’s a men’s “stag-on-the beach” meeting and gatherings targeting those in the arts and those who may think they are workaholics.

But meetings are not mandatory, and plenty of people spend a lot of time on the beach and by the pool. At 3 p.m., each afternoon, David “That Guitar Man” performs at the beach bar, playing cover songs like Billy Joel’s Piano Man and taking requests from the crowd, which sings along with him.

At night, there are activities such as an acrobatics performance in the theater. There is a dance party at the beach bar, where the group line dances to songs like “The Electric Slide.” One night, there is a Mexican fiesta with sober karaoke.

Jerry D. and his wife Chris, from outside of Chicago, pass much of their time sitting by the pool. Although excursions such as swimming with dolphins and bird watching are available, the couple plan to spend a lot of time relaxing.

“It’s me time,” says Jerry, who is 81 years old and has been sober for five years.

He points to the beach with its palm trees, yellow sand, deep blue water, and far off islands. “It’s just like any vacation, just with a select group of people and this location,” he says.

I get an invitation from a group of women I meet at the pool to accompany them on a sunset cruise. Jerry D. and his wife also attend. Ironically, we sail on the “Mas Tequila” Trimaran. But there is no tequila on this cruise. Just water, juices and soft drinks.

“My self-esteem was not so high as it is now,” she says. “I’m in the center of things, not on the outskirts. I love the people. The people are open and warm and loving.”

For some people, that love has turned romantic. The trips have resulted in 40 engagements and marriages, Abrams says.

Steven R. of New Jersey met his fiancé Cory N. of Illinois on a Turks & Caicos Sober Vacation three years ago. They were sitting by the pool on the first day of the trip. The two had just gone through divorces. They ended up spending the whole week together.

They got engaged six months ago. Steven and his dogs are planning to move to Illinois soon.

“I had this moment of ‘I’m moving on,’” Cory says of that vacation three years ago. “My life can go on and I can go out new.”